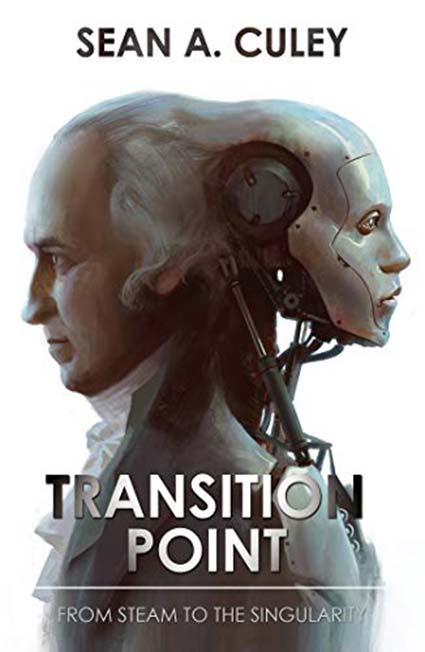 Transition Point – From Steam to the Singularity

The world is an uncertain and unnerving place right now. Technological advancement is creating a perfect storm of disruption, changing the way we shop, eat, work and communicate. The population is becoming increasingly polarised, and the public increasingly distrusts both the establishment and media, relying instead on alternative sources of information that feed their biases. The traditional structures that underpin Western society are all unravelling; identity politics is running rampant, and there is a heightened sense of victimhood with demands for the state to intervene.

Sean Culey’s new book, Transition Point, begins with an examination into why human progress suddenly exploded in 18th Century Britain, rather than in larger or more culturally advanced civilisations. He explains why the societal structures and individual freedoms that developed in Britain allowed the population’s innovative capabilities to flourish while the political structures that existed elsewhere held them back. Culey investigates the form and structure of this technologically driven progress, and why it is cyclical, not linear.

Culey then explains why we are now in the transition point between the fifth and sixth technological waves, in a time the old and new co-exist, creating a society with one foot in the past and one in the future. This is a time of winners and losers, of people with capital and those with just labour. People with desired new wave skills and mindsets, and those with redundant old-wave ones.

In Part Two of the book, Culey details the technological advancements contained in this new wave, showing exactly how they are going to combine to automate every aspect of the global workplace, from manual labour to office jobs. Innovations capable of not just replacing jobs, but also capabilities such as vision, hearing and speech, creating a future where humans are no longer the cheapest or smartest workers around.

In the third and most substantial part of the book, Transition Point examines the impact this new wave is going to have on the nature of business practices, on our scientific and technological advancement, on the economy and, most controversially, on the future of our society. Culey explains what actions are needed to prevent the economy from transforming into a nightmare of uncaring corporatism; a world where the wealth flows into the technocrats, establishment and capital owners, and the modern-day John Henry’s are left behind, outperformed by AI systems, robots and algorithms that work for electricity and never take a break.

Culey explains why, during this disruptive period, control is likely to be retained via the rolling back of the freedoms and liberties that made this period of progress possible in the first place. As China increasingly utilises technology to gamify life, creating a surveillance society designed to ensure its citizens comply with the rules passed down by their omnipresent government, the West will do likewise, only without the same level of openness and honesty. As western society continues to self-implode through a lack of belief in itself, its heritage or its traditions, these new wave technologies will become instruments of control and much as convenience. Once the citizens realise that their hard-fought freedoms no longer exist there will be resistance, but it will be too late, for once installed there is no going back. New generations will be born into a world of basic income bread and virtual circuses; a life of entertainment, enhancements and limited responsibilities. And knowing no different, they will just accept it, mourning not for that which they never experienced.

Finally, Culey explains why the collapse of the sixth wave may tear away the last threads holding together society, creating social disruption on a global scale. By the middle of the century, we may see the human race divided by their opinions on whether some humans should become gods - a society split into those who embrace a future of technological and genetic enhancement, and those who strive to retain our human traditions and lifestyle. This is unlikely to be a civilised divorce, and if care is not taken and conscious effort made, the end of the century may well see Homo sapiens go the way of the Neanderthals.

Transition Point – From Steam to the Singularity
HARDBACK
Culey Sean A.